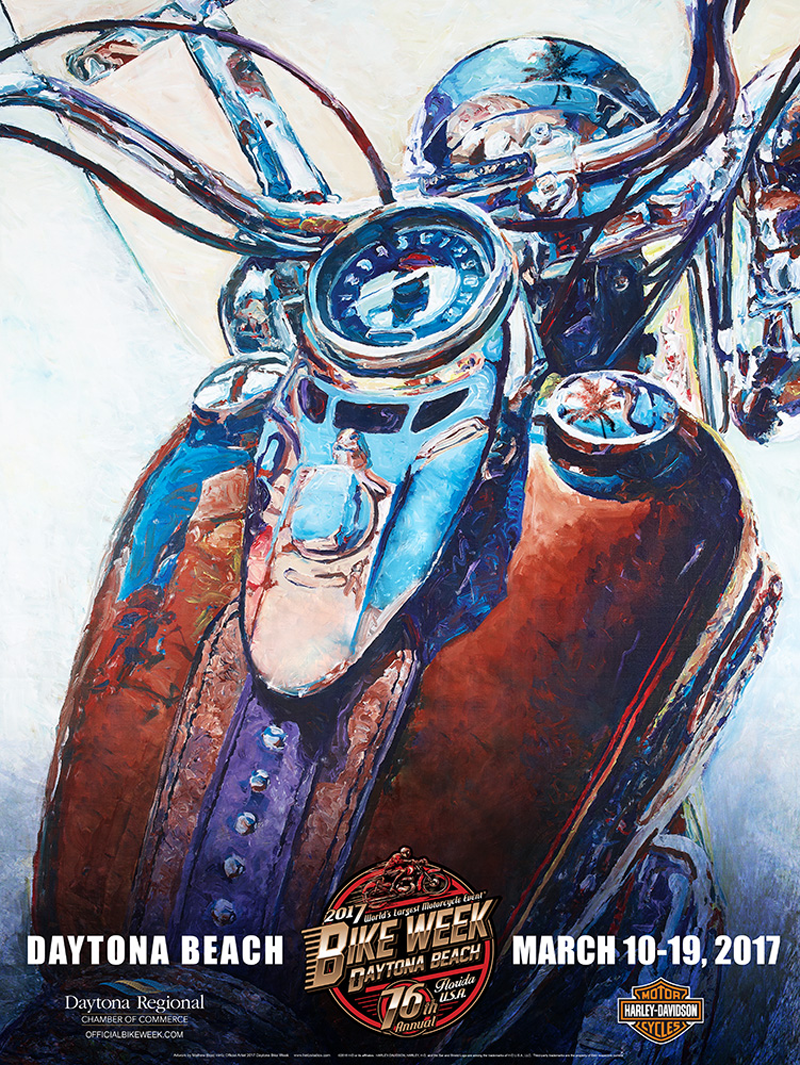 An original painting by the Milwaukee-based gas-and-oil artist Mathew Hintz has been selected as the key image on the Daytona Regional Chamber of Commerce 2017 Bike Week Poster..

Not only is this the third consecutive year a work by Mathew Hintz has been featured on the official Daytona Bike Week commemorative poster, the Daytona Chamber has also named Hintz the Official Artist of Daytona Bike Week.

Created in his distinctive layered-paint style, the painting depicts a classic motorcycle fuel tank with a Florida palm tree reflected in the chrome gas cap. Copies of the poster are free and available while supplies last at the Daytona Bike Week Welcome Center on Beach Street, and at select area businesses.

A graduate of the Milwaukee Institute of Art & Design, Hintz (seen below) has worked professionally for more than 20 years to develop an impressionistic painting style that’s as singular as a thumbprint and celebrates the form and craftsmanship of motorcycles and automobiles. His commissioned works are typically large in size and feature bold, heavy brushstrokes in oils over a sculpted base. His commissioned portraits capture the spirit of the open road and the styling details and custom elements that make a cherished machine unique.

From 2014 to 2016 Hintz was a Licensed Harley-Davidson Artist producing works sold through Harley-Davidson dealerships. His painting of the redesigned 2015 Harley-Davidson Road Glide motorcycle was featured on the cover of HOG Magazine, and Hintz has created the original cover art for Harley-Davidson Owner Manuals from 2008 to 2017.

Daytona Bike Week, which for years battled with the famous rally in Sturgis as the largest motorcycle event in the United States, runs this year from Friday March 10th through March 19th.